How many times have you plugged your medical symptoms into Google in an attempt to figure out what the hell was going on with your body? If you haven’t ever done this, for the love of god, don’t start. Unless you think it’s fun to read the numerous ways you might die by the time dinner rolls around. You sick fuck. Just leave it to the professionals, guys. Google is a rude bitch who will try to convince naive teenage girls they can pregnant from gobbling the turkey. (I’ve actually seen girls think this — what the hell, parents? Talk to your kids.) It’s shady and you don’t want to trust it with easing your paranoia. 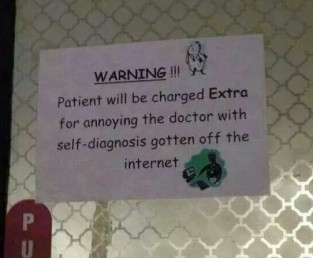 Speaking of turkey — today is Thanksgiving prep day. For the past few years, I’ve been in charge of the same foods: stuffing, mashed potatoes, and apple crisp. This time around, my mother-in-law basically begged me to not make the stuffing. She told me, with a forced smile, that she bought the ingredients to make stuffing weeks ago. Apparently mine has been so bad in the past she had to plan a month in advance. What the hell? Thanks, Karen. That didn’t sting like a bitch or anything.

Have fun cooking today, y’all. Hope everyone who is traveling is doing so safely. To all non-Americans who are going about their day like every other Wednesday: happy humping. (It is hump day, after all. Get to it.)